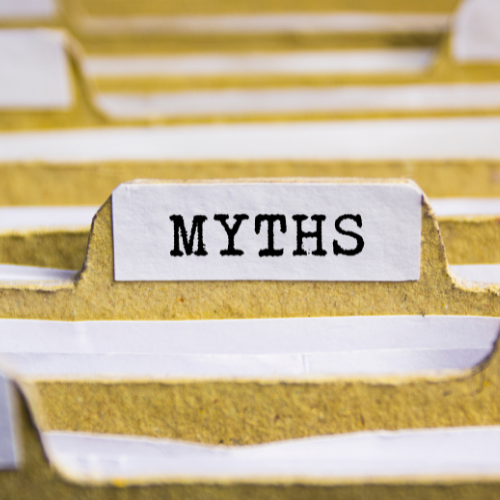 WITH SO MUCH INFORMATION BEING SHARED IN OFFICIAL MEETINGS, THE MEDIA, SOCIAL MEDIA, AND VARIOUS WEBSITES – PROTECT OUR WATERWAYS HAS PREPARED THIS SPECIAL SECTION TO IDENTIFY SOME OF THE MYTHS, MISINFORMATION, AND MISCONCEPTIONS ASSOCIATED WITH THE NWMO’S DGR PROCESS. THERE IS NO VALUE IN BEING INFORMED IF WE ARE ACTUALLY MISINFORMED. 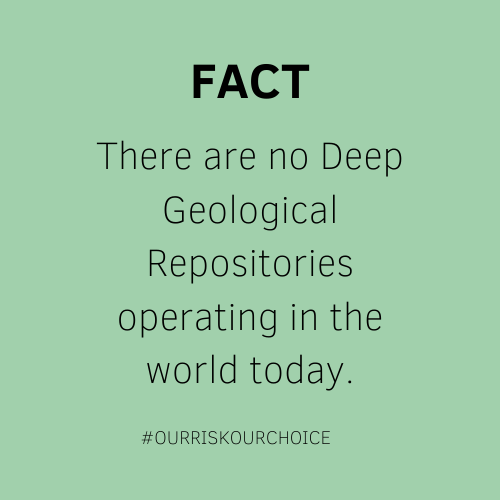 The Merriam-Webster Dictionary defines best practice as "a procedure that has been shown by research and experience to produce optimal results and that is established or proposed as a standard suitable for widespread adoption." Best Practice | Definition of Best Practice by Merriam-Webster

FACT: There are no Deep Geological Repositories operating in the world today. Finland has approved one site, near an operating nuclear power plant, and has started construction. They just started working on the first tunnels and have not received the license to use the facility to store nuclear waste but they have the license to build it. (Click here for more info on the Finnish disposal tunnel here.) 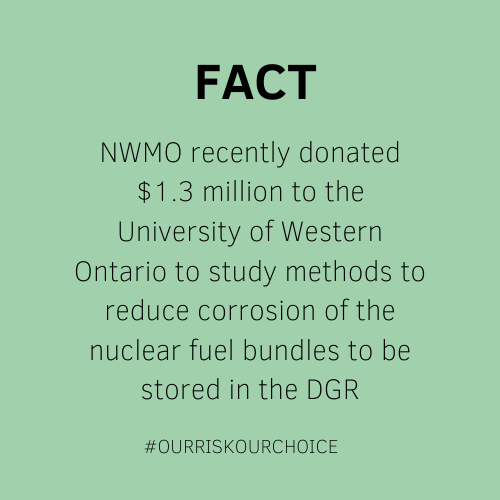 The DGR Ms. Swami is referring to does not exist. It is only a concept and, as a concept, is still in development.

FACT: NWMO recently donated $1.3 million to the University of Western Ontario to study methods to reduce corrosion of the nuclear fuel bundles to be stored in the DGR.

Western University electrochemist Jamie Noël stated, “We want to make sure, really sure, that if we’re going to have a nuclear waste repository that it is safe, and safe the first time around – because there will be no second time.”

While we encourage much more research into the safety issues associated with the DGR concept, it is an over-statement by the NWMO to say it “is safe and protects the environment”. This is the NMWO’s hope; it is not a fact.

The NWMO is asking South Bruce (or Ignace) to decide on hosting the DGR before the safety issues have been resolved. Their real message is “just believe what we tell you and say yes”.

It’s too dangerous to store nuclear waste on the shore of Lake Huron & Lake Ontario. 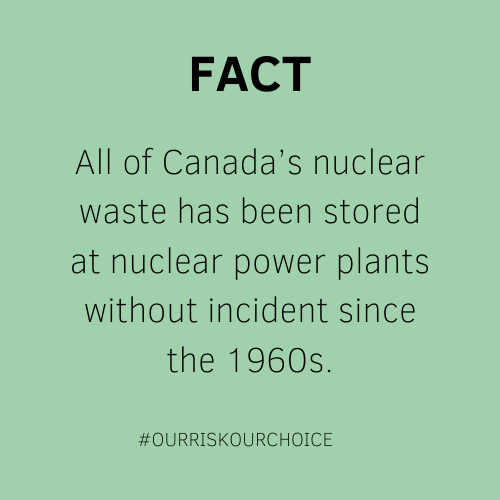 If this is true, then Canadians have been living under the risk of leaked radiation for more than 60 years.

FACT: All of Canada’s nuclear waste has been stored at nuclear power plants without incident since the 1960s. No matter the long-term solution, irradiated nuclear fuel bundles must be stored aboveground at existing reactor sites on Lake Huron & Lake Ontario before they can be moved. This is so they can cool and reduce some of the heat the radioactive bundles create.

The NWMO and its supporters have referred to POW as “fearmongers” – while knowing the current management strategy for nuclear waste has never been dangerous.

The DGR is modelled after nature 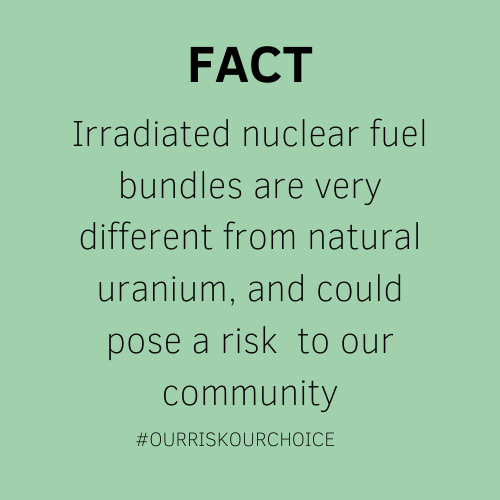 The nature of this statement is to convince you that since uranium comes from the ground, it is safe to put it back there.

“The project will only proceed in an area with informed and willing hosts. People in close proximity to the deep geological repository need to understand what it means to host the project and agree to have it located there.” Laurie Swami, President and CEO, Nuclear Waste Management Organization, March 23, 2021 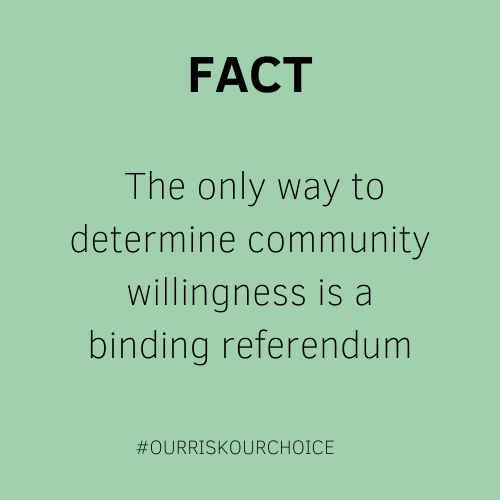 If we take this statement at face value, it would appear that if the NWMO deems that some people are uninformed, then those people will have no say. As the NWMO has not told anyone how it will determine if people are informed, then we can only assume that there will be some kind of test people will have to take before their opinions are heard (let’s hope there is not an essay required).

With NWMO funding the municipality of South Bruce  hired a consulting firm to conduct a Willingness Study. The draft report shows that the overwhelming response was that the people want a referendum. On November 9, 2021 the final report will be presented to the council.

FACT: The only way to determine community willingness is a binding referendum. The NWMO seems afraid to ask people straight up for a yes or no answer. We can only assume that they won’t like the answer.

If the process is community driven, how is that both Ignace and South Bruce are following exactly the same processes?

FACT: The NWMO is driving this process in collaboration with the Municipality of South Bruce. Any statements to the contrary (which are repeated with great frequency) are purposefully misleading.

Nice words, but in practice – the NWMO discourages debate.

FACT: The NWMO called Protect Our Waterways the “Unwilling to Listen Group” and has ignored all requests for an apology.

The NWMO-funded Community Liaison Committee has sponsored dozens of community education sessions over the last two years. Only one session included a speaker/expert critical of DGRs.